Allows a model of your choosing (such as users) to subscribe to a plan, which enables features.

Paid Up is a start-to-finish Stripe subscription engine. You set up the plans and coupons you want on Stripe, and the gem gives you a way to tie those plans and coupons to authenticated users, granting them abilities based on the features outlined for their plan. 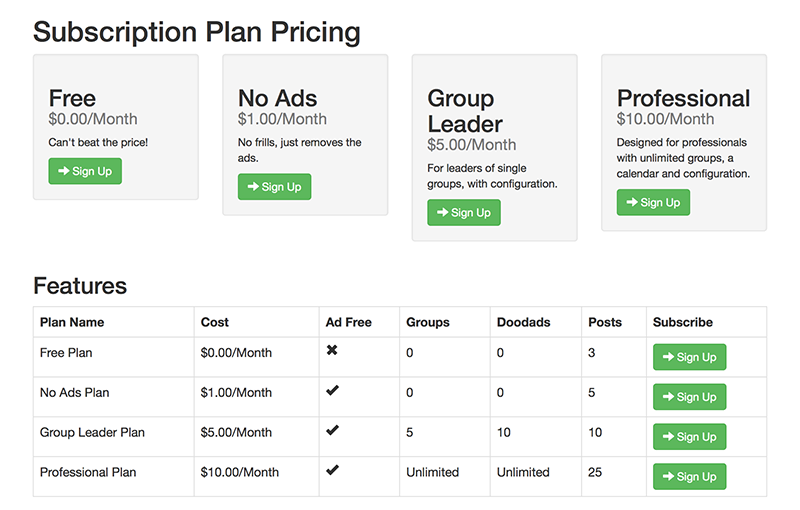 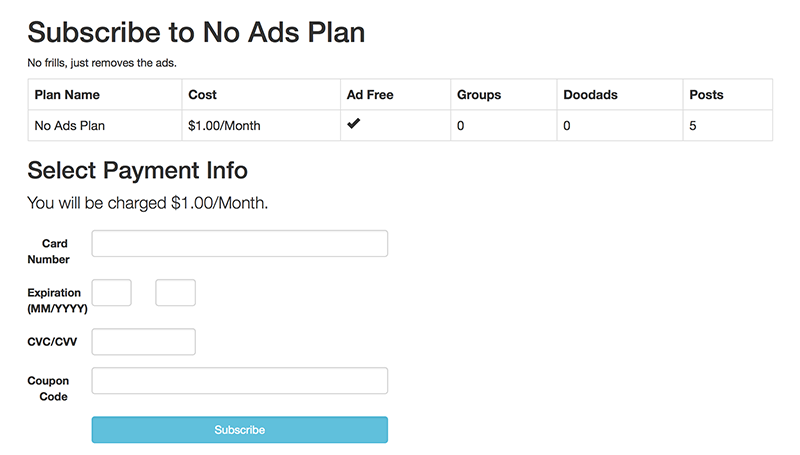 First, add paid_up to your Gemfile:

To start with, you will need a User model and the corresponding table, set up with your business rules for users, such as profile fields or theme configuration.

Next, install PaidUp for your user model by executing these commands:

Edit your config file at config/initializers/paid_up.rb to set up some other key details.

Set your environment variables with your STRIPE_PUBLISHABLE_KEY and STRIPE_SECRET_KEY. (Check your operating system or IDE's documentation for details. I use the gem dotenv for this.)

Using your own code or Stripe's convenient web interface, add the plans and coupons you intend to offer.

Each plan will also need a record in your own database, so for each Stripe::Plan you create, note the id and use it as the stripe_id in the corresponding PaidUp::Plan. At a minimum, you will need an anonymous plan, a free plan, both with a cost amount of 0; and also at least one paid plan.

Coupons do not need any further configuration, other than adding them to your Stripe Account.

Next, add a Stripe::Customer to serve as the Anonymous User, and subscribe that customer to the anonymous plan. Note the customer's id and copy that into your stripe configuration file.

Pay close attention to the settings in Account Settings under Subscriptions and Emails, as they have a big effect on how your site behaves.

Set up each PaidUp::Feature using the config file. (A config file is used rather than using records in an ActiveRecord::Base model because relationships cannot be created at runtime.) Associate the features with the corresponding plans using the PaidUp::PlanFeatureSetting model. For an example, check out the seeds file at spec/dummy/db/seeds.db

In the table_rows case, the table and its model must exist. the table should have a :user_id column, then you need to add paid_for to the model, and from there the appropriate has_many and belongs_to relationships will be created for you.

In the rolify_rows case, the table and its model must also exist. Once that is done and the corresponding PaidUp::Feature is created, add paid_for to the model. This means the resource model will run the resourcify method, and the User method will have had the rolify method added to it during install, so no further setup is required.

If you only want to count certain records against a user's tally, for example only records with active set to true, you can add the scope option with a symbol corresponding to the desired method or scope, like so:

In order for PaidUp's AJAX functionality to work (which is required because Stripe uses AJAX), you will need to add this to your layout file, preferably near the end of the element (for speed reasons):

Abilities corresponding to features you have defined will be generated automatically, as an :own ability on the specified tables, plus rational defaults for :manage, :index and :show permissions, if you include the PaidUp::Ability module and use the initialize_paid_up(user) command, like this:

If you try generating a list of users (such as for display in a user directory), you may find that the Stripe checking code slows down your query significantly.

Another option would be to create a Person model that inherits from the User model but omits the :stripe_id column (as above) in its default_scope. You can use this Person object for queries related to directory or profile display, thereby speeding up all queries not requiring plan information.

Your controller should inherit from PaidUp::PaidUpController, which in turn inherits from your own ApplicationController.

Your user model will need to call the subscriber method (this is done for you at install).

The resources referred to in your config will need to call paid_for, like this:

In your application controller, add:

In your layout view, include the following code snippet, which will only fire when a subscription is made.

This needs to go above your call to Google Tag Manager, so that the data in it is available to GTM.

Doing this will populate the e-commerce data in Google Analytics, but you must also have that feature turned on.

The method enabled was renamed to enabled?.

Version 0.9.0 enabled coupon codes, which are saved on the user's record. Be sure to run rake paid_up:install:migrations and migrate your database after upgrading.

Version 0.8.0 introduced database changes to the foreign key columns to work with namespacing in Rails 4.2.5:

Contributing to Paid Up